“NOTHING IS AS UNPREDICTABLE AS THE UNDERGROUND”

No trial trenching or roadblocks. Instead, MapXact one morning took a stroll down the road and bike path with a traffic controller and the ground radar. On Dr. Deelenlaan in Tilburg, the location of cables and pipelines was determined before reconstruction works started. MapXact was commissioned by VolkerWessels Telecom to perform a ground-radar study. “The ground radar saved us loads of time and effort in the run-up phase,” says project leader Jos Jansen of VolkerWessels Telecom.

Before reconstruction works started, VolkerWessels Telecom located the position of existing cables and pipelines at Dr. Deelenlaan in Tilburg. This busy road consists of two car lanes with a bike path on either side, and a should in-between.

“A good job for the ground radar”

With reconstruction works, it is very important to get an exact picture of the underground infrastructure. VolkerWessels Telecom had to decide what to do with the cables: divert them, or pick them up and lay new ones.  Was there anything in the ground to prevent diversion, such as old foundations or other pipelines? The cadastre (KLIC) did not indicate clearly whether the cables were under the bike path, the shoulder or even the road. “It was a good job for the ground radar,” Jos Jansen finds. “Normally we would have dug a trial trench in a few spots to see where the cables were. Both the road and the bike path were tarred, so you couldn’t just break it up quickly.”

MapXact went over the area using the ground radar as well as a Ground Penetrating Radar (GPR). Without any roadblock or traffic arrangement, since the road and bike path could simply stay open. A traffic controller saw to it that the ground radar had enough room to drive over the area in loops. The loops enabled them to map the underground infrastructure with XYZ coordinates. Within a few days, the data were processed and MapXact delivered the report to VolkerWessels Telecom. The red and blue loops are the axes that were needed to display the underground map. The blue loops give a reliable image. The red loops give a less reliable image, due to a poor GPS signal at that moment. This was because of high trees standing along the side of the road.

The ground radar results by and large corresponded to the KLIC and VolkerWessels Telecom data. The soil radar however also located deviations, such as a few side branches to cables. According to proprietary data, these were located elsewhere. The results showed pipelines of which the ownership was unclear. “Very handy,” Jos finds. “During excavations we therefore knew which areas needed attention and where exactly we had to take the possibility of other cables into account.”

By including the ground radar in the preparations for reconstruction, the executor can avoid coming up against excavation damage or unexpected problems, Jos feels. “Suddenly coming across an unknown cable while digging can mean hours of waiting and delay. Plus you don’t want the contractor to twiddle their thumbs while the meter keeps running. It’s asking a lot of the people working in the field to anticipate something that’s not written on paper.”

Jos is enthusiastic about the ground radar and happy about MapXact’s innovative plans. “For the time being, one day in the field still means two days in the office to make up the report.” In the near future, MapXact wants to create software for the automatic processing of ground-radar images. All you will then have to do, is compare the results with KLIC.

“People think: It’s easy, you just shift a cable a bit. But it’s not that simple”

Jos moreover hopes soon to see ground-radar technology become so specific that it will also be clear which cable you’re looking at. “If I dig a trial trench, I immediately know what kind of cable lies where. But digging trial trenches requires more time, effort and roadblocks.” VolkerWessels Telecom now also bases the location of cables and pipelines on KLIC data and proprietary data. Any difference between the two means that a trial trench must be dug. “We work in the ground, and that’s about how unpredictable you can get,” Jos explains. “People think: It’s easy, you just shift a cable a bit. But it’s not that simple: cables can for instance lie underneath a sewer, be under tension, or be located between other pipelines. You can’t just saw through a cable.”

With the help of the ground-radar results, the engineer made an interpretation and set it out in a work drawing. The bundle of cables was diverted completely during reconstruction in April. All telecommunication cables will be laid in the new pavement that will be built. “In the plan and during works outside we keep account of differences that the ground scan indicated.” 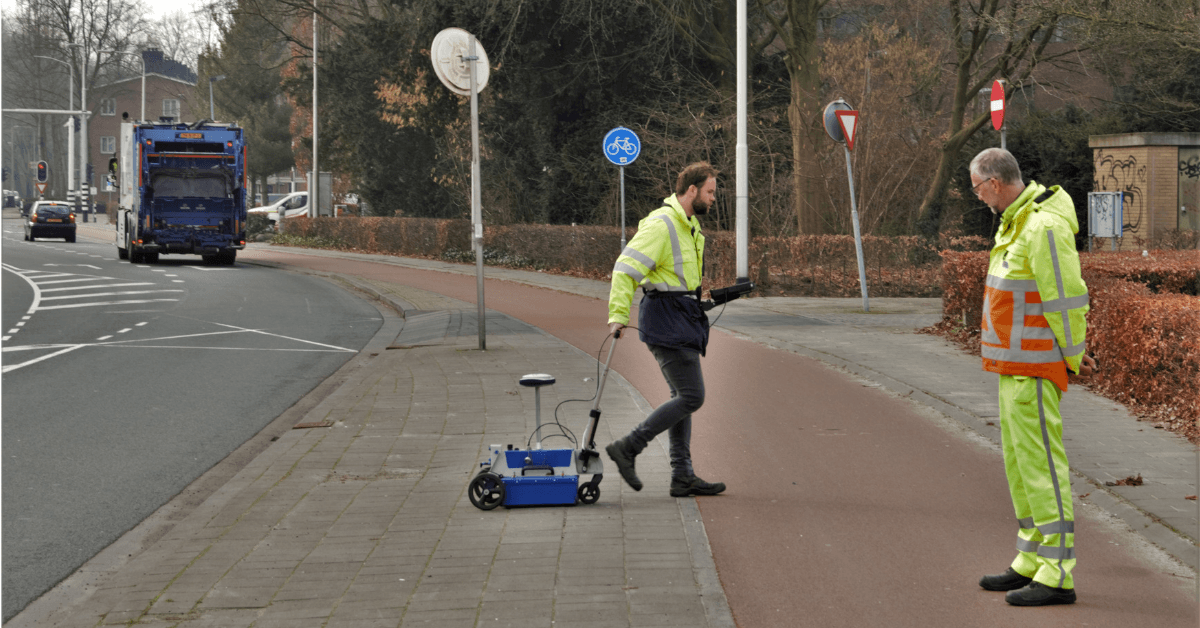