“NOW WE KNOW FOR SURE THAT THE CABLE IS THERE”

Is it there or not? In Nijmegen, VolkerWessels Telecom had to remove an inoperative telecommunications cable, but it was unclear whether or not it was still there. VolkerWessels Telecom called MapXact in to go underground. The XYZ coordinates established by the ground radar solved the problem. ”Now we know for sure that the cable is there, but a lot deeper than we thought,” says project leader Jos Jansen.

Is there a cable or not?

VolkerWessels Telecom was commissioned to remove inoperative cables on a vacant lot belonging to Waterschap in the Nijmegen Lent area. According to the cadastre (KLIC), there were two cables: one fibre optic, and one electric. According to Waterschap, the telecommunication cable was no longer there. VolkerWessels Telecom asked MapXact to do a ground scan with their ground radar.

The telecommunication cable was still there

MapXact developed the ground radar in cooperation with VolkerWessels Telecom and Gasunie. The Ground Penetrating Radar (GPR) was also used for the land survey. The ground radar went over the land in loops to establish a complete map of the underground infrastructure. A few days later, MapXact had processed the data and delivered a report. The delivered drawing clearly showed the exact location of a telecommunication cable and an electric cable in the ground.

“The cable lay much deeper than we thought”

The ground radar not only maps X and Y to determine the position of cables. Jos is especially happy about Z, the depth coordinate that is given by the ground radar. “Usually telecom cables lie 60 to 70 centimetres deep. The MapXact results showed that this cable lay as deep as 1.1 metres at certain points. The cable lay much deeper than we thought.”

Jos is pleased with the ground-radar findings. “Without the ground radar, we would probably have concluded that Waterschap was right. Had we dug trial trenches, we wouldn’t even have found any cables down to 1 metre. So we would have reached the same conclusion: that there is no cable,” says Jos. VolkerWessels Telecom shared the MapXact results with Waterschap. Jos: “We advised Waterschap to remove the cable.” 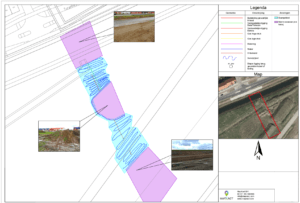