INSTALLING A HEAT GRID? GET A COMPLETE OVERGROUND MAP WITHIN A FEW HOURS 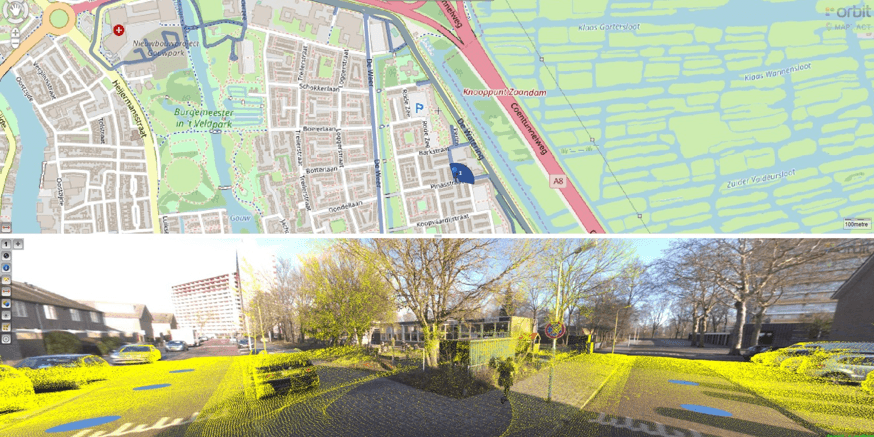 In just a few hours, you can have a complete project site mapped for a heat grid. It will be delivered as an accurate point cloud down to the nearest centimetre. To install a heat grid in the Zaanstad municipal area, Visser & Smit Hanab had the overground environment scanned by MapXact. “An ideal tool to compare situations,” according to project leader Karlo Ezinga of V&SH.

“This will be my workplace for the coming year,” project leader Karlo Ezinga explains while walking along the many pipelines that have been recorded. He walks into a construction trailer on the improvised building site on the edge of the Peldersveld neighbourhood in Zaandam. Together with the Hoomseveld and Rosmolen neighbourhoods, Peldersveld will form part of the Zaanstad heat grid that Visser & Smit Hanab is building in 2019.

Municipalities are switching to heat grids

More and more municipalities are installing heat grids. A heat grid is a district heating system: large-scale central heating one might say. No more need therefore to install a boiler working on natural gas in each home. Visser & Smit Hanab was commissioned by Zaanstad municipality to build a heat grid. In the course of one year, V&SH has been working here on a 3.5 km network of underground pipelines through which hot water is flowing. The heat source is a sustainable local biomass plant. “We built two pipelines: one for hot-water supply from the biomass plant to the homes. The second takes cooler water back to the plant. A neat little heating set-up,” according to Karlo.

A picture of the whole grid with the mobile-mapping vehicle

In the run-up phase, Visser & Smit Hanab made use of MapXact’s mobile-mapping vehicle. “We always map the overground environment before we start. Normally one of our own work planners measures everything,” Karlo explains. “They take general-view and detailed pictures of the entire route. What is the layout of the entire area? Are there any particularities? But this is very time-consuming. Besides, the pictures are not specific enough and we’ll still miss certain things. That is why we chose MapXact for this project,” says Karlo. In just a few hours, MapXact’s mobile-mapping vehicle took very high-resolution panorama pictures and simultaneously did a 3D scan of the entire project site.

Realistic picture of the real environment

Karlo shows the detailed panorama pictures in the online viewer. “The MapXact results have several advantages,” he explains while he roams virtually through the streets with the viewer. “First of all, it gives as an independent and very accurate picture of the situation before the works start. If there are any discussions about damage in the work area, we can for instance show that it was already that way before. And if we have to do any repairs later, for example to a pavement, we’ll know exactly how to restore it to its previous state. MapXact also records the entire area in a very short time.”

Accurate down to a millimetre

The mobile-mapping vehicle accurately records the whole area. Panorama pictures and 3D scans are brought together in the MapXact online viewer (see picture below). With the help of the 3D scan (in yellow on figure 2), each point gets its own XYZ coordinate. Assets can also be connected to certain points, for instance a lamppost. In theory you can measure every millimetre in the online viewer.” Karlo joins two points in the viewer to a lamppost. “See, you can measure the dent in this lamppost in millimetres. So there won’t be any disputes about whether the dent became bigger while we worked.”

Counting trees in the online viewer

Karlo says that MapXact’s mobile-mapping images are particularly valuable when disputes regarding the project site arise. “Recently I had a dispute with a subcontractor who had chopped down trees for us. He said that ‘x’ number of trees had been chopped, but that was not what I thought. I looked in the online viewer and counted the trees. It appeared that there were indeed fewer trees than he’d indicated. For discussions like these, the pictures are extremely useful.”

No digging or roadblocks with ground radar

MapXact maps not only the overground but also the underground environment for projects. Using its ground radar, MapXact accurately scans the underground area to locate cables and pipelines. For this project, Karlo says that underground drawings had already been provided. The ground radar was therefore not necessary. “For the Zaanstad heat grid, Visser & Smit Hanab did only the construction, not the engineering part. Lots of trial trenches had previously been dug.” Karlo can however see the advantages of the ground radar, particularly for building heat grids. “Digging trial trenches takes time and money. Besides, heat grids are mostly built in cities. In crowded areas, trial trenching is even more of a hassle. Think for instance of digging under the tarmac. The slightest mishap will mean that a street has to be blocked. If you can do the same with the ground radar without digging or blocking streets, that’s great.”